Home Cathlyn Choi in the media

Cathlyn Choi in the media 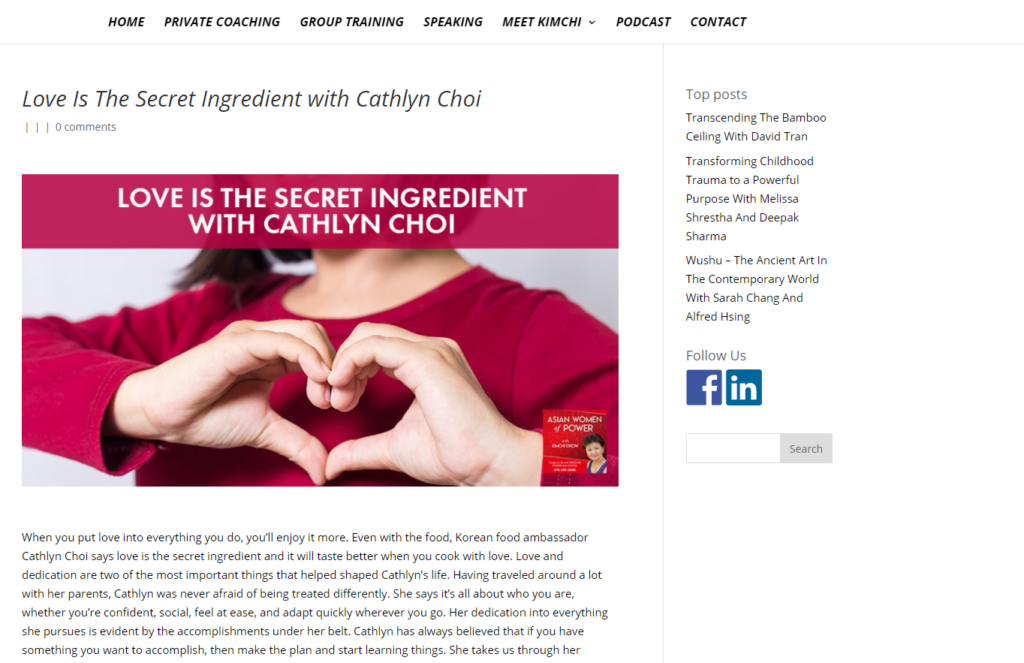 San Diego, California – October 24, 2012 – Cathlyn’s Korean Kitchen, a unique cooking show hosted by Cathlyn Choi, featuring unique Korean recipes and ingredients, has been scheduled for distribution for national broadcast to over 350 public television stations beginning November 17, 2012 through NETA, one of the largest distributors for public television.

Cathlyn’s Korean Kitchen is the only cooking show currently produced in theUS that features not only healthful and delicious Korean ingredients and recipes but serves up a side of Korean culture by host and producer Cathlyn Choi.

“Cathlyn’s Korean Kitchen is very interesting, educational and entertaining. Especially the host and chef Cathlyn Choi has a warm and friendly demeanor on camera which represents Korean food and culture very well. Having been the program director at NETA for over 30 years, I am very excited about launching her program and sincerely believe the series would be a good fit for public television viewers who wish to learn more about ethnic foods, in particular Korean,” states Ms. Gayle Loeber, Program Director of NETA.

Cathlyn Choi explains, “I wanted to showcase the many healthful and delicious traditional Korean foods that I learned to cook by my mother and grandmother while growing up inKorea. Now that Korean foods are becoming popular globally and a growing food trend in US restaurants, I wanted to share with Americans not only the delicious flavors found in Korean foods but also their reported health benefits as well.”

Producing Cathlyn’s Korean Kitchen was a self-funded endeavor by Mrs. Choi and her American husband and co-producer. With the additional generous support from the Korean Culture Center of Los Angeles, the production for a 12 episode season four was completed. An online fund raising campaign also raised funds for the show thanks to many friends, family and fans who wanted to support the show and Cathlyn. “Unlike most large budget cooking program’s produced for television, we produced our show literally, in-house!” says Mrs. Choi. “My actual kitchen was dressed and lit as a television set. I think it added more authentic feel than a faux kitchen set on a soundstage. But I have to say, this program wouldn’t have been possible without the support from the Korean Cultural Center of Los Angeles.”

This is actually the fourth season for this program. Season 3 was first aired on regional PBS television through PBS SoCal inSouthern Californiain 2011. “I’m so excited that I was given this opportunity to share my passion for my Korean food & culture with a national audience, especially for my thousands of fans and followers on Facebook, Twitter and Youtube. I think it is a good fit for PBS’s mission of promoting cultural diversity by educating their viewers about the diverse cultures living in theUS. Hopefully viewers will become more interested in learning more about Korean foods & culture through my show and gain a better appreciation ofKorea’s rich and fascinating history.” said Cathlyn Choi.

Pre-screening of Cathlyn’s Korean Kitchen Episode One as well as details of the entire program will be announced at an upcoming press conference to be scheduled inLos Angeles,Californiain November.

For information on NETA, visit www.netaonline.org

Established in 1997 and headquartered inColumbia,SC, NETA is a service of the National Educational Telecommunications Association serving public television licensees and educational entities in all 50 states, the U.S. Virgin Islands, andPuerto Rico. We connect people and ideas, by providing quality programming, educational resources, professional development, management support and national representation. We offer a simple, nation-wide program distribution service to our members, to other Public Television stations, and to independent producers. 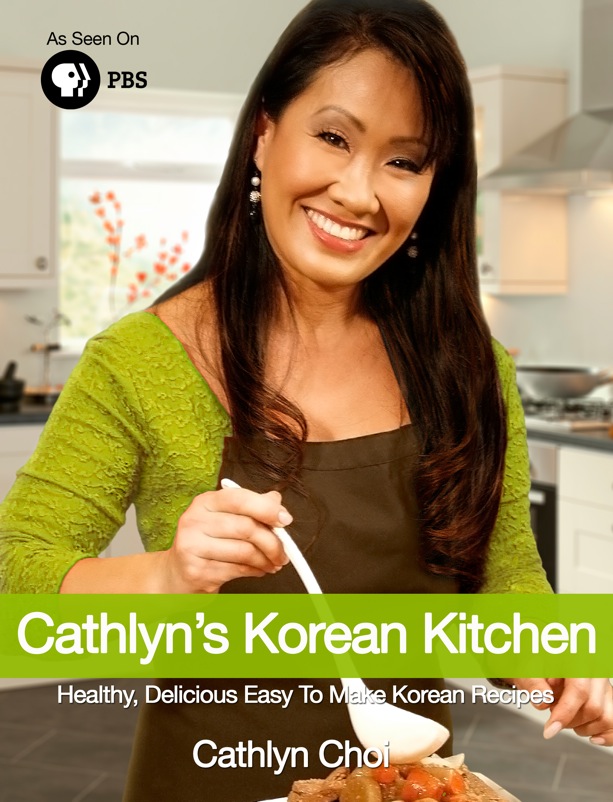 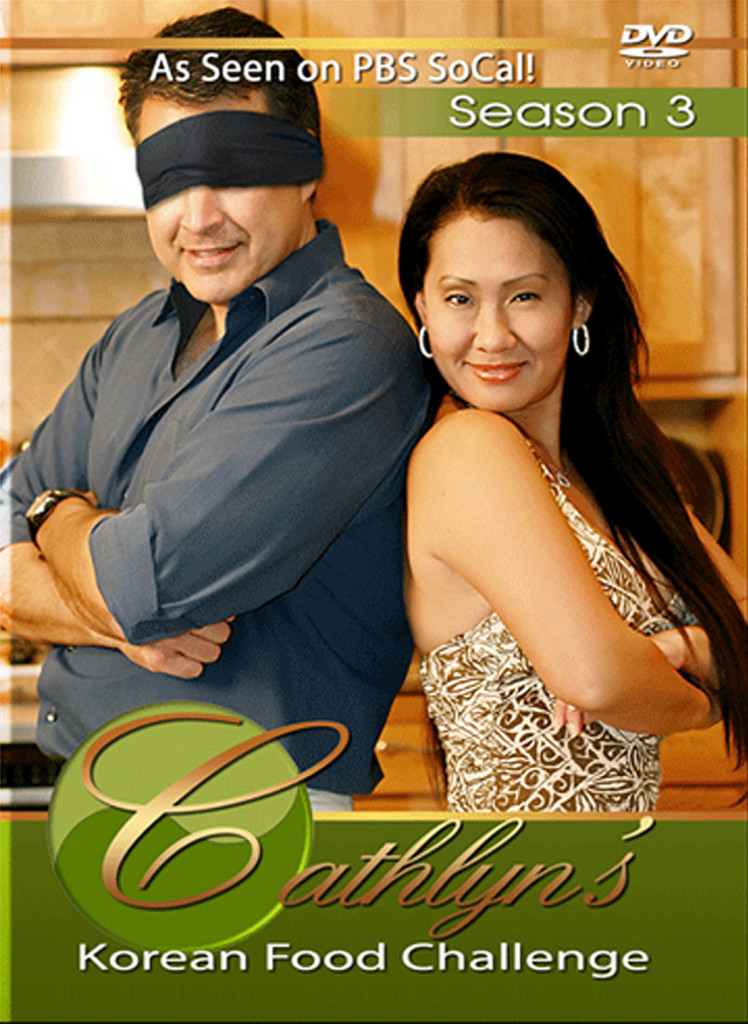 The event was organized and hosted by FAME Corporations in support of First Lady Michelle Obama’s campaign that was developed to solve the epidemic of childhood obesity within a generation. Present at the event were Chef and Restaurant Owner, Wolfgang Puck, White House Assistant Chef Sam Kass and Food Network Celebrity Chef Ingrid Hoffmann. Other VIP guests included SupervisorMarkRidley Thomas, California Attorney General Kamala Harris as well as other LA city council members.

While explaining the health benefits of Korean foods, Cathlyn had several kids up on the stage and had them roll their own Kim Bop. She referred to it as the Korean Burrito, but a much healthier version. She also explained how to make a Soojunggwa, at home using persimmons, ginger, dried dates and urged parents to try substituting carbonated sodas with homemade punches and water.

“Since it was an event to promote healthy foods for kids to prevent obesity, I chose KimBop as the main dish because it is truly a well balanced, nutritious Korean food that all kids enjoy eating. They also had a lot of fun making their own Kim Bop.,states CathlynChoi.

White House Assistant Chef Sam Kass says, “I love Korean food especially the BBQ and all the wonderful accompaniments that come with it. Cathlyn did a great job relaying her message about the various health benefits of Korean foods, especially the kinds that kids would enjoy and have fun with it at the same time.”

“We are happy to have Cathlyn participate in this event and greatly appreciate her time and efforts in preparing the delicious food samples for our attendees. Cathlyn is a true Korean food ambassador and we would love to have her as one of our spokespersons to represent the Korean community in our future events,” comments Denise Hunter, President and COO of FAME Corporations.

In spite of the successful outcome of the event, Cathlyn however added that she was disappointed that despite the pre event marketing campaign and robo-call that went out to thousands of households, there was hardly any presence from the Korean community including the media.

“Since Koreans comprise one of the largest ethnic groups in LA, I hope to see more Korean Americans businesses, organizations and individuals actively participate in community events in the future, especially when it comes to promoting our unique culture.”

In support of Cathlyn’s efforts in promoting Korean food and culture, ZionMarket inSan Diegosponsored all the ingredients for the event, including Soojunggwa, Jabchae and Kim Bop samples.

AME Renaissance is an economic development program within the FAME Assistance Corporation (FAC). FAC is a non-profit 501(c)(3) corporation affiliated with the 19,000 member First African Methodist Episcopal Church of Los Angeles (FAME). FAME is the oldest Black church in Los Angeles. Founded in 1872, it has a long tradition of supporting initiatives for enterprise development and community empowerment. FAC has been used as a funding vehicle that manages and supports the multiple programs of FAME Renaissance.

Let’s Move! is a comprehensive initiative, launched by the First Lady, dedicated to solving the problem of obesity within a generation, so that children born today will grow up healthier and able to pursue their dreams. Sure, this is an ambitious goal. But with your help, we can do it. Combining comprehensive strategies with common sense, Let’s Move! is about putting children on the path to a healthy future during their earliest months and years. Giving parents helpful information and fostering environments that support healthy choices. Providing healthier foods in our schools. Ensuring that every family has access to healthy, affordable food. And, helping children become more physically active.